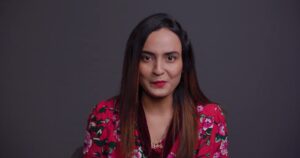 Feral closed out 2021 on a high by winning our first big public tender, for a series of films for the British Council.

The organisation was looking to promote its Women In STEM scholarship programme – and quickly. So following a tender period of just one week and heading into the festive season, it was all hands on deck to get the production up and running in order to meet the deadline of ASAP.

Fast and furious is where Feral excels, so within a week our producer Helen was interviewing the first of 11 scholars based at universities across Britain.

The success of the project was always going to come down to appointing the right team, and the powerhouse combination of Helen and production manager Anna, based back at our Devon HQ, meant no detail was overlooked as the crew embarked on a whistle-stop tour of England and Scotland.

Narrowing down a list of scholars to interview was the first major challenge, working around their availability and our ability to get the crew to various different locations as quickly as possible. As the second day of interviews was under way, the first profile piece was already scripted and coming together in the edit suite and ultimately, we were able to deliver all ten films in under eight weeks, despite interruptions from both Christmas and Covid.

But it wasn’t just about speed. Interviewing young women from a variety of different cultures using a direct-to-camera style meant that putting them at ease was an absolute priority and Helen’s vast experience and ability to build a rapport was central to the success of the films.

It was also testament to our ability to understand the needs of large corporate and institutional clients. With the British Council team operating in different time zones, we simplified the process by assigning two key contacts for all communication and keeping everything including feedback and release forms online for ease of access. Our project management software helped keep everything on track, ensuring that every problem was spotted and solved quickly and every micro-deadline was met.

We also managed to add value to the contract by offering not only the nine profile pieces, as the tender required, but a longer main promotional film as well as 1:1 square versions of everything for use on social media.

Karen McCormack, senior project manager at the British Council, who oversaw the project, said: “The response to our tender was very competitive, but Feral Film stood out to us as a production company that would meet our needs, and within our short time frame too.

“The Feral team were very professional and personable and really made us, and our scholars, feel at ease and in good hands. Our scholars were handled with sensitivity; and they felt their stories were valued, and they too are thrilled with the final outputs.

“Feral did what they promised to do and delivered on time and within budget. The final videos are well scripted, smart and professional and are being shared around the British Council global network.”

You can watch the suite of films here: British Council Women in STEM Scholarships – YouTube